By Paul Millar (aka, Paul_the_piker)

Summer arrived early in good old Blighty this weekend! The mercury was touching 25 yesterday and it was far too warm to remain indoors, so what better way to spend a glorious late spring evening than pursuing the enigmatic and bewitching cruey! I have very fond memories of these fish as a youngster but I haven’t caught or specifically tried to catch them, well, ever really, but knew of a small pond about 45mins from home that was rumoured to hold some absolute crackers for the North West, fish of over 2lb, which even by national standards are a rare beast these days, so at 16:00 I was traveling down the motorway with Uncle Mike in tow!

Content with just spending some time by the water doing what I love, I had no expectations, but I applied myself as I always do. I had chosen a swim in the North West corner of the little pool as the warm wind was pushing hard into there and my instinct told me it should hold some fish. 7.5’ deep at 6m out into the open water but with a very inviting 3.5’ at 12.5m next to a reed bed on the out of bounds west bank to my right. The wind was far too strong to fish the reeds swim so that would have to wait with the hope that the wind subsided later on. It was challenging at first with the strong south easterly making pole fishing awquard even on the 6m line and bites were not forthcoming, my mind wandered to what might be grazing over the crushed hemp and micro pellet loose feed I had cupped in next to the reed bed but the wind was still too strong to present a delicate pole rig with the finesse required for the crucians over there. It would have to wait…

Another half an hour passed to around 19:00 and with only a couple of plump “just minted” roach to my name the wind seemed to subside ever so slightly. The opportunity had presented itself to have a look over on the reed line and with that I quickly switched rigs, baited the size 14 and shipped over. The wind was still strong enough to make presentation difficult and the rig was being flicked and pulled about but I managed to keep it steady just long enough for something to suck in the hook bait and cause the insignificant little orange pimple on the surface to disappear! With all the composure of a kid at Christmas, the pole was swung to the left, away from the reeds in anticipation of an angry cruey darting towards the reed bed in a bid to escape. Instead of the expected solid resistance a rather small but beautiful rudd came flying from the water like a Patagonian dorado! But, it was a fish, and gave me the confidence to continue to battle the wind on that line.

Next put in, the float settled and after about 5mins dipped under again and this time I was met with spirited resistance. Initial instinct said tench as the number 14 elastic stretched towards the reeds but steady pressure soon had the culprit under control and boring straight down under the tip of the pole, with that tell-tale “jag jag” fight. At this point my mind began to consider the possibility that this could be the target species, but with relatively coloured water it wasn’t until it popped up and was scooped in one liquid motion into the waiting landing net that it was confirmed. And, what a stunner!! It’s brassy flanks glistening in the evening sun, ejecting water and flicking it’s pectoral fins in defiance. A clear PB (previous 1lb 10oz) by a considerable margin! Protocol followed and a number was assigned (2lbs 7oz) after which my trusty photographer, Uncle Mike, fired off a few quick snaps and she was returned to the water to make another young boys (at heart!) dreams come true! 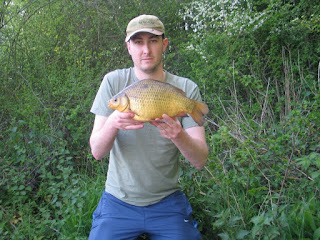 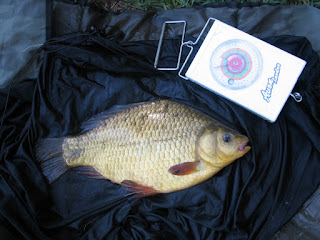 But we weren’t finished there! The line was topped up with a little more loose feed and left to settle following the disturbance that had been caused a short time ago. A return to the open water line demonstrated that nothing had moved in on that feed so there was no other choice than to return to the reeds in the hope that another golden dinner plate had moved in.

Within 5mins the previous scene was re-enacted and another breath-taking specimen was lying in the folds of the landing net at my feet. Not quite as big as the previous but every bit as proud and handsome. At 2lbs exactly, it made it a brace of “twos” and me one very happy angler! 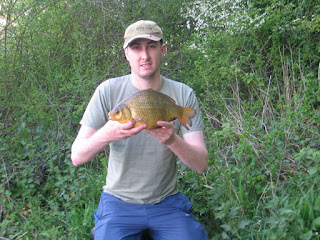 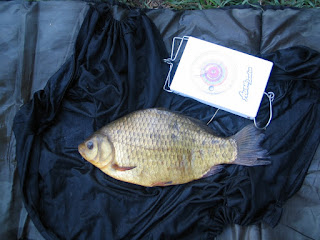 Hold the press! Good luck comes in threes doesn’t it? Back over to the reed line and around 15mins passed without an indication, thoughts of the commotion and the fading light causing any remaining fish to vacate the swim to deeper water had started to enter my head, until, the bronze semi-circular back of a cruey broke the surface not 6” from my float. A trail of pin headed bubbles tracked the course of the fish as it ambled through the swim picking up loose offerings at leisure as it did. I was tense as I awaited the inevitable dip on the float, but it never came? A quick lift of the rig proved my suspicions, no hook bait! Oh bother! Or words to that effect! The rig was re-baited and re-positioned with the speed of a cruey bite and as if by magic the float dipped under once more. Immediately it was clear that it was another cruey of a similar standard as those previous and the scales confirmed this with a weight of 2lbs 4oz! Scale and fin perfect, an Egyptian gold leaf sculpture brought to life, lay there before me and all expectations surpassed! 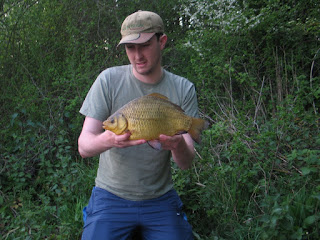 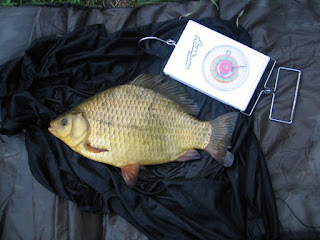 The evening was not done, but the next bite was met with a much more powerful and far less sedate fight that had the pink elastic stretched across the swim like a taught washing line! It could only be a doctor fish but it wasn’t long until those seductive teddy bear eyes were looking up at me having been subdued.

As the light began to fade, the sun was setting on a session to remember and I drove home with an immovable smile and a spring in my step for the working week to come; the reason why my passion for angling is so entrenched firmly reinforced!
Posted by Piscator at 12:43