Give The Pike A Pasting
Chris Hammond 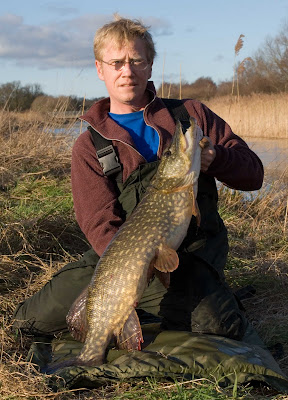 Like many other pikers I’ve been experimenting with flavoured baits, on and off, for some time now. The majority of the flavourings I’ve used in the past have been, unsurprisingly, typically oil-based. I have to confess to harbouring a degree of scepticism though regarding the principle of oil-based flavourings. I’m sure the various fishy scents carried in these products will have an appeal to pike, what concerns me however is the effectiveness of these oil ‘hosts’ in carrying that scent, or taste, through the water to the pike.
Without meaning to state the blindingly obvious, it goes without saying that oil floats on water. Any oil leaving a submerged dead-bait should, and indeed does, float fairly quickly to the surface. Now I’m willing to concede that in a small number of situations, probably in deep-water in particular, this could be beneficial. On a flowing river I have to say this scenario does little to inspire my confidence.
I sometimes wonder if, in the majority of situations, injecting our baits with oils does little more than make it easier to remember where the bait landed! Having said that though I have to confess to using them still occasionally on the basis that, at the very worst, they don’t put the pike off. Perhaps some element of the inherent fish scent is separated from the rising oil and carried through the water to the predators Certainly I know other anglers that swear by oils.

There's one of those age old myths in pike fishing that states that pike won't feed in heavily coloured water. I say 'myth' because that's what I firmly believe the idea to be. When I first began to target pike seriously I had read little about the species, and in all honesty I just never realised that we 'couldn't' catch pike in coloured water. When my local rivers suffered a deluge of rain and turned the colour of cocoa, or the local drains were pumping, I simply carried on fishing in blind ignorance. That proved to be a lucky break for me because, being an angler that most often found himself using dead-baits, I kept on catching. The old adage, ' A little knowledge is dangerous' springs to mind. as is often the case it pays to find things out for yourself.

Flavoured baits of course really come into their own in turbid water conditions. In these conditions, particularly on a flooded or fining down river, I’m expecting the pike, generally, to be on, or close to the bottom. If the rivers been in flood or coloured up for a day or two they’ll often be lying ‘doggo’, usually carrying a few lice on their bellies as proof.

Feeding pike can initially be difficult to find in the first day or so of a major change in colour, but once they've become accustomed to the conditions they will begin to feed. They aren’t always that keen to move around in search of food in heavily coloured water, so it is easy to form the impression that they aren't feeding, but on flooded rivers pike can actually be easier to locate, once you have a background knowledge of the holding areas. There are often only so many suitable places for the pike to hold up when the river is in spate, so you can be pretty confident that they’re ‘in front of you’. It may, however, require that a bait to be literally ‘dropped on their heads’ to invoke some action.

In situations like these the pike are more likely to be intent on trapping rather than actively hunting their prey. The low visibility in coloured water limits the pike’s ability to hunt by sight to some degree. So a more viable proposition in these conditions, from their point of view, is probably to find a secure spot or shelter in which to lie in wait for their unsuspecting targets to swim past.

That of course is where the flavoured bait has its uses. Though they might not fancy a fruitless search for prey fish in low visibility, the pike can still be prepared to utilise their highly tuned sense of smell to pick up and follow the scent of carrion; a.k.a our dead-baits. Boosting this scent trail with an added flavour or extra scent increases the likelihood of a fish finding your bait.

With little faith in the efficiency of oil based flavours the obvious course of action is to use actual particles of bait as an attractant. And several anglers I know have had success with minced fish introduced via a feeder.
Swim-feeders do have their limitations though, they’re usually too small for a start and they lack the ability to carry ‘one off’ large quantities of attractant. There’s also the problem of imbalance with terminal tackle, I.e they lighten as they empty, and this can have an implication on bite detection at range, if the feeder is used as your lead.

Another way of getting a good dollop of minced fish out there close to your bait is the well documented, ‘fish lollipop’. Freezing baited traces into a lollipop mould full of minced fish creates an effective casting missile and ensures the attractant is bang on the bait. However it’s a messy tactic and again has obvious limitations. You need a reliable thermal control system of some kind for a start, and it’s really only a method for the coldest days. . It’s also difficult to do with anything other than very small baits.

A few years ago I began to experiment with using a paste as an attractant. Initial results were extremely promising and several years later the tactic still works brilliantly for me. And there aren't many of my ‘world beater’ ideas that have stood the test of time quite so impressively. 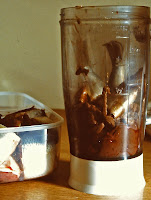 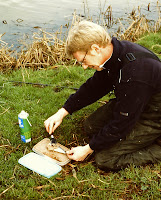 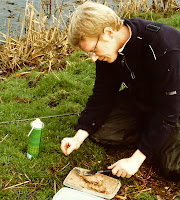 Basically I wanted to create a sticky, attractive fish paste, that would dissipate widely through the water. The paste I came up with works a treat. It is sticky enough both to enable casting, and to ensure that its release from the bait is reasonably slow, in order to keep the trail of attractant at work for longer periods. And it creates a lovely cloudy scent trail of tiny fish particles and blood.
An added attraction is that there is no possibility of feeding the pike off as with free offerings. I remember the great Eddie Turner once stating that he never threw discarded baits into the water while he was still fishing on the premise that any bait taken by a pike might be the only time that fish feeds on that day. I could see the logic of that line of reasoning, and still do. I'd rather not take the chance.
So to make the attractant:
To a couple of pounds or so of any baitfish, I add about three-quarters of a pound of liver and a tube of Anchovy paste. Obviously you can conjure up your own version and ingredients, however I can assure you this recipe works. It’s important to mince the ingredients in a blender to the finest paste possible. It pays to snip the tail and fins off the fish before mincing. I like to leave the bloody head end intact though and then check through the paste for any lumps of sinew or gristle etc afterwards.

A consistency like toothpaste is perfect. Firstly, and most importantly, this ensures the paste spreads throughout the water to its maximum capacity but it also it makes sure that not a single fragment of sinew or bone can mask a hook point The homogenised liver not only adds a bloody element to the flavour trail, but also helps to create the sticky, glutinous properties of the paste and slows down the rate at which the paste dissipates through the water.

Once blended to a fine consistency, the paste can be ‘trowelled’ over the bait with a flat blade or spatula. There’s a bit of a knack to it, but once you get the hang of it you can encase the whole bait in a reasonably even layer of the sticky attractant. For close range work the paste is durable enough to withstand the cast and nothing more needs to be done. For longer casts, or in particularly fast flowing water, I use another trick to ensure there isn’t too much paste washed off on splash down. 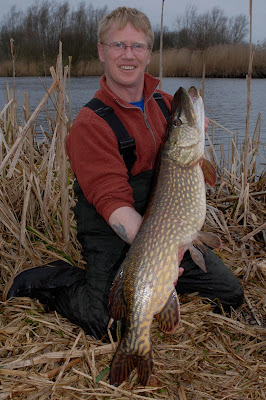 To make sure that all of the attractant stays intact with the bait until it has settled in the slowest, bottom layer of the water. A can of plumbers freezing spray is used and the pasted bait is given a quick blast before casting. This creates a lightly frozen crust on the surface of the paste and stabilises the whole thing nicely.
I’ve primarily used the method in river and drain fishing situations, however I have also used it on suspended, float fished baits over deep water on a few occasions; and had a few nice fish. The paste dislodges slowly and showers the water below with a fine cloudy mist of fishy particles. A twitch of the bait here and there will keep the dissolving process on the go in really still water. 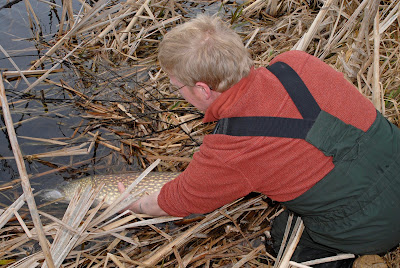 It is possible with the plumbers spray ( or a rack you can hang baits on for a short period in your freezer) to paste and seal baits in cling film and then freeze them too. Use a little flavoured oil if you like to pre-grease the cling film prior to wrapping to prevent it getting too caught up in the paste.

If you want an edge this coming winter, particularly when the rains come, try the paste. I'm sure you won't be disappointed.
Chris Hammond 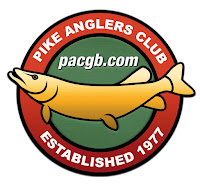